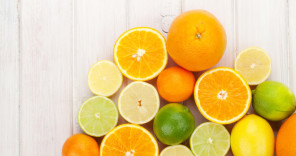 Calabrian bergamot, a fruit with infinite properties and active ingredients. Called "green gold", according to tradition it was imported by Christopher Columbus, but it is probably a cross between a bitter orange and an acidic lime. These two citrus species inhabit the Calabrian area that goes from Villa S. Giovanni to Monasterace, home of the popular Calabrian bergamot, which is grown here with an orchard of 1500 hectares (90% of the global production). Produced throughout the world, but only in the region of Calabria does it have a complex DNA of 350 traits.

Calabrian bergamot: a produce with unquestionable properties, suitable to keep under control excess cholesterol, and it prevents cardiovascular diseases. The essence of Calabrian bergamot has also beneficial effects on the respiratory system and in the treatment of depression. Bergamot helps as well in many skin conditions (psoriasis and fungal infections).

The properties of bergamot are best assimilated by drinking it in a juice. It is used as a flavoring in tea and in cosmetics, recently in sweets, too. The essential oil invigorates weaker smells, counteracts those that are intrusive and brings out latent fragrances. A fundamental ingredient in a lot of products, like cologne, soaps, creams and suntan oil.